I had a peaceful ride this morning through the Louisiana bayous and past New Orleans. I take the back roads whenever possible because they usually provide a better feel for the area in which I’m traveling. I took highway 98 into East New Orleans. As I passed through and observed the town I realized how different back roads in rural areas are from those in urban areas. Let’s just say that I found myself in the inner city and wasn’t sure that was a good idea. But no turning back!

I noticed a few things in particular today: 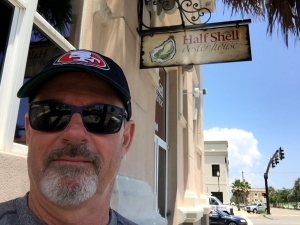 As I approached The White House Hotel it started to rain. The road ahead looked like it was going to get hit hard, so I pulled into the back lot of the hotel and put on my rain jacket and full-face helmet. I didn’t put on my rain pants because I thought it would get way too hot with them over my jeans, and for some stupid reason I thought they wouldn’t get all that wet. As I pulled out of the hotel parking lot it started to pour. In three minutes my jeans were soaked, then five minutes later the sun came out and I started to roast in the rain gear I’d put on. So I pulled over, took off the rain jacket and full-face helmet, and went on my way. My jeans were dry again in about 15 minutes.

That’s the way it is riding. You are constantly going through microclimates and have to adjust your clothing as you go.

The back roads with their frequent stop signals combined with temperatures and humidity in the high 80s made for a tough day. I hit a wall of sorts, and had a little trouble making it to my planned destination, the “best kept secret” of the Gulf Coast, Navarre, FL. I rolled in, parked my Harley in front of the motel, unloaded my gear, and crashed for a while.

I ate a late dinner at a bar in a pizza parlor. I met Gary there, a local and frequent customer. He moved here from Illinois many years ago, and loves it. We had a great time talking about Harleys. (He has one similar to mine.)

I was considering taking tomorrow off and staying her for another day when I fell asleep.

I took it easy this morning, taking time to relax and plan some of my future routes.

Last night Gary told me I should ride over the bridge from the Navarre waterfront to the beach and cruise west for a few miles. Good advice. It is a beautiful area with white sands and raised homes. I suspect this community was the model from which the Cajun Riviera is recreating itself.

The ride east revealed beautiful beaches of the Pensacola area. The town of Destin has some of the most beautiful beaches I’ve ever seen with bright white sand and clear, blue water. I’d come here again for an extended stay…when it’s a little cooler. 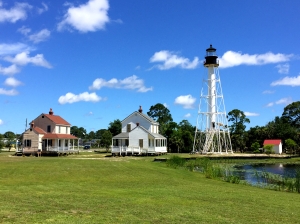 Riding east on highway 98 I passed through Santa Monica, Laguna Beach, and Miramar Beach. I thought I was back in California for a short while.

East of Panama Beach is the Emerald Coast area. It’s not on the gulf per se, but rather an inland waterway. Great area, but the beaches and water look more like what you would find on a large lake. 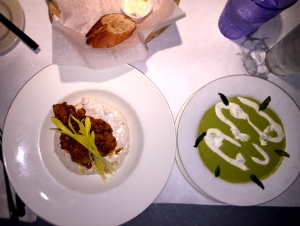 I stopped in Point Saint Joe, a quaint historical town, to take in the Cape San Blas lighthouse.

I stayed in Crawford, which doesn’t have much of a restaurant selection. I found a new place in Tallahassee, Kool Beanz Café, and had dinner there. It was worth the 50 mile round trip!