Bruce met me for breakfast at the Best Western. I suspect he arrived much earlier than our planned meeting time of 7:30. We enjoyed conversation about his service to our country in the Pacific Theatre of WWII, how he ended up buying his first Harley in 1947, as I recall, and what it was like to go back to the islands where he fought the Japanese…now twice. He told me a few more stories of his escapades riding his 2007 Harley that now has over 50,000 miles on it. The conversation got a little deeper than the day before, and that made it all the more meaningful. Bruce is perfectly imperfect, like all of us, and he is an honest man who served his country well, a good father and grandfather, a compassionate, servant leader to the University of Richmond, and now he’s my friend. I hope we ride together some day soon. 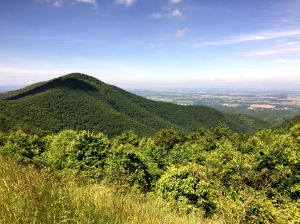 Today was a special day on my ride for two reasons. By the time I arrived in Washington I had passed the halfway point of my journey reaching 6,100 of 12,000 projected total miles over 18 of 36 planned total days riding. More importantly, Lisa was flying out to spend the week with me here!

I could have taken a direct route to our nation’s capitol, but roughly 100 total miles out of my way was the Shenandoah National Park. So I headed west.

As I exited highway 64 to the north on highway 250 north, the GPS took me around in a circle and off to the right on a very narrow road. I came to a stop sign on Skyline Drive. To the left was the south entrance to Shenandoah National Park. To the right was the north entrance of Blue Ridge Parkway, named “America’s Favorite Drive”. I stopped and thought for a few minutes. Taking my pre-determined route I’d arrive downtown at around 3:00 in the afternoon, about a half hour before Lisa was to land at Dulles International. 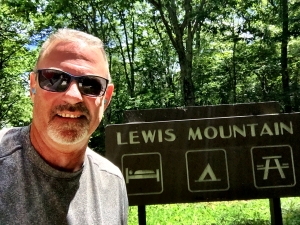 The Blue Ridge Parkway runs from George Washington National Forest in the north through Jefferson National Forest, Pisgah National Forest, Nantahala National Forest, and into the Cherokee Indian Reservation in North Carolina near the Tennessee border. Southeast of the reservation is a stretch of highway 120 known as Tail of the Dragon at Deals Gap. With 318 curves in 11 miles, it is America’s number one motorcycle and sports car road, and mighty tempting. Dave and I rode the Blue Ridge in 2007, but missed this exciting stretch of road. In spite of my desire to give it a run, it was a full day ride away. That just wasn’t going to happen. I looked left, rolled on the throttle, and headed into Shenandoah. 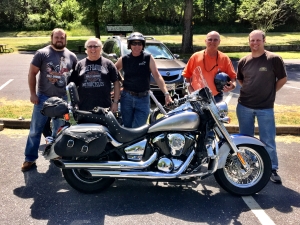 Skyline Drive north through Shenandoah is yet another spectacular ride, albeit the speed limit is 35. As I cruised along I stopped for a break met these motley looking characters. I noticed one was lathering himself with sun tan lotion. I commented that seemed like a good idea. Further, I confessed that I prefer to ride with long-sleeve, sun-blocking T-shirts. I didn’t look as cool as he did, but I felt consistently well protected from the sun.I struck up a conversation with these guys. They were all from Philadelphia and out on a three-day ride to the Blue Ridge. We talked about the community of Harley riders across the country. It doesn’t matter whether you are black or white, blue- or white-collared, as long as you ride well and safe, you have a friend around the next corner. The six of us represent a diverse mixture of people, yet we became caring friends in an instant. Ride safe, men! 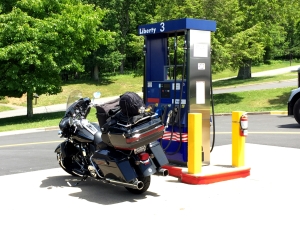 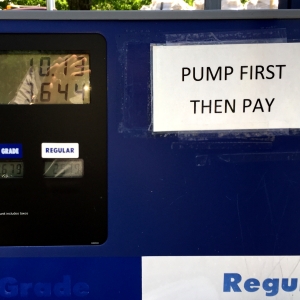 When is the last time you were allowed to pump, then pay?

The balance of the ride was wonderful. The views were quite good. While it’s difficult to compare Shenandoah to the majesty of Yosemite, each provides a great outdoor environment for us all to enjoy. Today was no exception here in Virginia.

The elevation in the park is about 3,200 feet, so it was a cool day of riding. As I headed north and east, descending into rural and then transitioning into urban areas, the temperature rose rapidly. It was nearly unbearable when the traffic on I66 leading into Washington, DC came to a complete stop. Thankfully the GPS directions were spot on today, and I managed to navigate the crowded streets to our hotel for the next week. 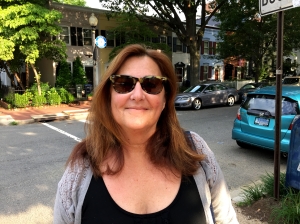 Lisa arrived safe and sound. While the riding has been great, I was excited to see her after 19 days on the road.

We’ll be taking in all that DC has to offer over the next six days. I’m going to do my best to enjoy my time with Lisa here, minimizing my postings. I’ll do my best to capture some of the fun and unique things we do and run across, and share them with you periodically.

Make it a great week, everyone!