I woke up this morning feeling a little sick. So we took a break to do some laundry and rest. Late in the afternoon we visited my brother, Brian, at his office. He is the CEO of the International Society for Technology in Education (ISTE). I enjoyed seeing his work environment, very much a reflection of himself, and meeting the people with whom he works. One person in particular, Craig, I’ve known via social media for a few years, so it was good to finally meet him in person. We toured Brian’s apartment, then had dinner at Dish + Drinks. My nephew, Evan joined us. Evan, originally from southern California, has lived in the area for several years, and works at the Library of Congress service for the blind and physically handicapped division. We rarely see him, so this was a special treat. It was great for the four of us to spend time together!

This morning it was clear to me, I was coming down with a sinus infection, actually the third one in six weeks. I spent some time researching the best place to go given our limited, Obama Care-related plan. The choice was either a retail clinic or urgent care. Based on the description on Blue Shield of California’s website, retail was the right place to go for a sinus infection. So off to MinuteClinc, inside CVA/pharmacy, we went.

As we arrived in the Columbia area, a long line of people in suits was waiting to attend an event at the Warner Theater. We were very curious about what, exactly, was going on.

I registered with MinuteClinic, waited, and was called in to the nurse practitioner’s office. After about five minutes of discussion, she determined she could not treat me. She would have to assume I had a cold until 7-10 days after coming down with these particular symptoms. So we went to a Starbucks while I researched urgent care centers that were accepted by our plan.

As we headed off to the urgent care center, we noticed Nancy Pelosi get out of a large, black SUV and walk into the Warner Theater. (Think Jack Bauer!) She isn’t worthy of the effort to raise my iPhone to take a photo. But we wondered if the president was going to arrive. Another bystander thought the security was a little too lax for the president, so we went on our way. As it turned out, Barak Obama did arrive about 45 minutes later to deliver remarks at an investiture ceremony for Attorney General Loretta Lynch. 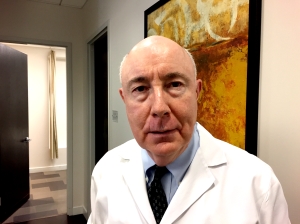 I arrived at DC Immediate & Primary Care and, as expected, had to wait about 1:30 to see the doctor. He was a classic physician who asked all the right questions and quickly accepted the fact that this wasn’t my first sinus infection. He prescribed what I needed to get well enough to continue my ride in two days, and we went on our way back to the CVS/pharmacy.

Lisa wanted to walk by the White House, which was on the way to our hotel. As we arrived at the front of the White House, there were many people gathered taking pictures and talking, some in large groups. Just as we walked up, a DC police officer started yelling for everyone to clear the road and park across from the White House by walking north. I stopped to take a quick photo. As I did, he yelled, “If you stop to take a picture, I get to do this,” and he blew his whistle as loudly as he could. He did this multiple times to multiple people. There was a Boy Scout troop in the area, and they started walking northwest along a path out of the park. The police officer blew his whistle at them and yelled, “Boy Scouts, leave the park to the north. Stop going that way.” We are either American citizens, each of whom owns a small fraction of the White House, or visitors from a foreign land who want to see where the leader of the free world lives. Couldn’t the police be a little nicer to everyone? The scene felt more like a police state rather than the United States. It reminded me of how rude the national park service employees were encouraged to be in the fall of 2013 when the national parks were shut down. (I know they were encouraged to be, because I stopped and talked to several of them at Mount Rushmore.)

During our time here in Washington our primary mode of transportation has been the DC Metro rail system. It is a bit tired and the station agents are unfriendly, but it works, and has served the city and its many visitors well. 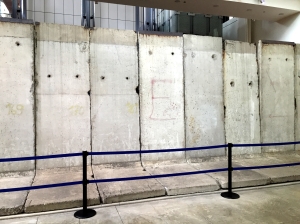 Actual section of the Berlin Wall, from the East, exactly as it existed

Actual section of the Berlin Wall, from the West, exactly as it existed 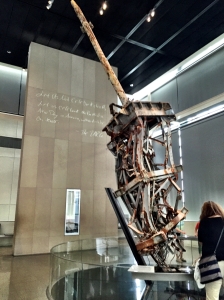 Feeling a little better today, we headed to the Newseum, which my brother said was one of the best venues in the city. As we boarded the Metro car, Lisa led, and another passenger jumped in front of me. At that moment the doors to the car started to close. I stuck my arm in between them, and another passenger inside the train tried to pry the doors open. I ended up knocking on the window from outside to let Lisa know I wasn’t going to get on the train. We are different people. She got off on the next stop, the logical response to her. I got off at in four stops, at the Metro Center where we would have to change trains anyway. I tried sending her texts to let her know. However, in spite of a four bar signal, my phone wasn’t working. We eventually met at the Newseum, and a good laugh about the incident.

The Newseum is laid out similarly to the US Holocaust Memorial Museum. The tour starts by taking stairs downstairs, where an exhibit of the Berlin Wall is on display, and then an elevator up four floors. From there the tour cycles through each floor.

From new coverage of the Viet Nam War to 9/11, Newseum presents American history as seen from the eyes and cameras of reporters. There is a memorial section dedicated to the new people who have lost their lives while trying to report from dangerous circumstances. We spent more than four hours there and merely scratched the surface.

The question of whether or not the media can be fair and accurate has existed for a very long time. So has the government’s desire and efforts to control the media. We live in a society where all are encouraged to speak freely, and the freedom of the press is protected. But people who want to reconfigure the truth to meet their objectives, or control how the story gets told to present darkness in a positive light continuously compromise that ideal. Either way, we all need to be diligent to search for the truth in a cesspool of propaganda and political correctness.

We intended to go to the National Museum of American History, but Lisa pointed out that I was running out of energy, so we went back to The River Inn.

When we got off the Metro, I decided I needed another haircut. I found Puglisi’s Hair Cuts in the Foggy Bottom area. It was a classic, Italian-owned barbershop. Able gave me a great hair cut, which I needed to start the second half of the ride around the USA.

We had dinner for the third or fourth time at Dish + Drinks, which is in our hotel. It is a small, upscale restaurant with terrific food and a local presence. I met Keith, and his sidekick Maram, when I arrived last Friday and was waiting for Lisa. He is a very intelligent, well-informed man with the perfect personality for running a restaurant. He knows everyone, what they like to drink, and adds a personal touch to every concoction. He and Maram took great care of us. It’s no wonder that in a city with so many good restaurants, we kept migrating back “home” to our own little place. Thanks, Keith, my friend!

From the 2004 presidential campaign