Yesterday, just past Weed I noticed a truck lot on the left of the interstate full of brightly painted water trucks. I rode back this morning to exit 743 to take this photo. A gentleman posted some information about Truck Village about a year ago after talking with the owner. Apparently these are in-service water trucks for Cal Fire. 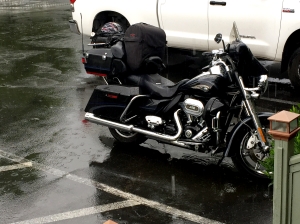 Devastation from the 2014 Eiler Fire 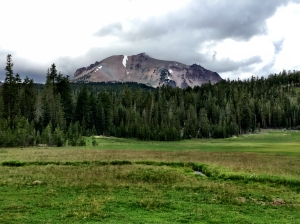 It started raining in Mt Shasta at about 3:00 am, and continued through my departure a little after 8:00 am. It seemed so ironic, here in this drought-stricken state, to begin, for only the third day of the entire trip, in full rain gear. I’d hoped to ride up Everett Memorial Drive to the site of the original Mt. Shasta Ski Bowl where I learned to ski when I was a teenager. An avalanche wiped it out in 1978. But the mountain was socked in with heavy clouds cover and rain, so there didn’t seem to be much point to taking the time to ride into the clouds with minimal visibility. There was a window of time between 9:30 am and 2:00 pm before thunder and heavy rainfall at my destination, so I needed to get moving.

I headed south on highway 89. My first stop was Burney Falls. It is an ever-changing, 129-foot waterfall in Shasta County. Geologists estimate that the falls, carved out of soft diatomite by the erosive force of running water, moved about a mile upstream over the past 3 million years. I’ve enjoyed the falls since I was a kid, and it was refreshing to be here again.

I continued south on 89 to Lassen Volcanic National Park. On the way I observed the destruction caused by the August 2014 Eiler Fire near Hat Creek. This will be the ninth and final visit to a national park on this ride. While I’ve been here many times, my perspective, altered by the many experiences I’ve had over the past 45 days, was different. Lassen Volcanic is the 37th ranked national park by number of visitors. Yet it is as beautiful and majestic as those ranked ahead of it. With only 400,000 visitors annually, Lassen Volcanic is one of the best-kept secrets of northern California. Today, with intermittent rain, wind, rapidly evolving cloud formations, it seemed more like Fall than Summer. The sun breaking through the clouds and flashing on specific scenes in the park appeared as God’s way of getting my attention. For example, I watched as Brokeoff Mountain was “featured” in brilliant sunlight with just a wisp of a cloud tickling its peak, and then it quickly disappeared into the shadows while the sun highlighted another small peak.

My destination for today and a day of rest tomorrow was our cabin—“Camp” as my family calls it. Our maternal grandfather, Ivan, purchased the lot in 1951. He would haul a WWII officer’s tent up to Shingletown from his home in Red Bluff every Memorial Day weekend and set up Camp. There was the tent, with a wood stove inside of it, a small, outdoor kitchen, a round fire pit, a rope swing, and, of course, an outhouse. “Granddaddy” would break camp, load what was portable into his black, wooden trailer, and haul it back to Red Bluff for Winter storage every Labor Day.

Long story very short, I received the property in 2001. Two years later I had a cabin built on it, mostly out of wood milled on site from trees felled to make way for the cabin. I spend about a week a month here now that I’m “reDeployed.” My brother, Gary, has a cabin next door, purchased from our uncle Stan in the 1980s. It was originally built for hunting in 1945. Gary remodeled it soon after my cabin was finished. He and his wife, Billie, really enjoy the area. My sisters Janet and Karen, and my brother, Brian and their families visit Camp from time to time, so it has continued to be a blessing for all of us. 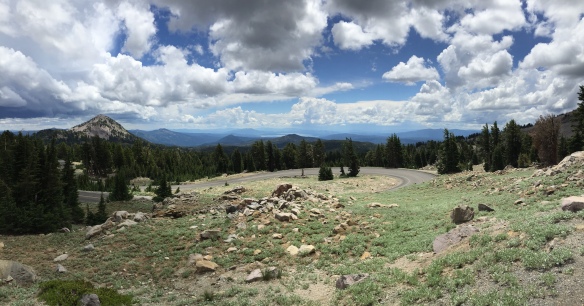