(TB) Thursday, July 28— Kamloops, BC to Prince George, BC

My riding buddy, Dave and I met Joker, a well-weathered man of average size, in April of 2007 in Dalhart, TX on our ride from Charlotte to San Francisco. He had long hair tied in a ponytail, and small eyes surrounded by wire-rim glasses. Hailing from Beaumont, TX, Joker and his wife, BJ, were on the penultimate day of a 10-day ride. His bike pulled a single-wheeled trailer that was a source of much pride. Joker was a writer for “Skunk Dots”—Texas’ Original Biker News. So we asked for some advice about riding in New Mexico, explaining that we were headed west on Route 66. Joker scowled, said we could go that way, then told us the old Santa Fe Trail was much better. We took his advice, headed northwest rather than southwest, up into the mountains near Taos, and finally on to Santa Fe. Joker knew what he was talking about…it was a beautiful ride.

I met a fellow Harley-Davidson rider in front of the hotel this morning. He told me that his group of three was five days into their ride and had covered 2,800 miles in five days, or 560 miles/day. They travel mostly on freeways, and cover a lot of ground in an hour. I prefer smaller, scenic byways, which just takes more time.

I introduced myself, but the man, from Québec, only spoke French. He was riding a Can-Am Spyder, and pulling a trailer behind it. Another guest by the name of Wayne came out, and the three of us started a conversation about the three different models of Harley Davidson between us, and the pros and cons of three- versus two-wheelers. Wayne translated for Mr. Québec, who was really excited about his Spyder, and for good reason. It performs well, has great safety features, and blocks rainfall from hitting any part of his body. As for me, I like the freewheeling and lean of my two-wheeler.

Wayne asked me about my route for the day. I told him I was headed to Prince George by H97. He asked if I knew people in Prince George, as though that would be the only reason to go there. I responded no, that I was just taking a loop to the north and then southeast to get to the Rockies. He said I could go that way, but if I took H5 north to Little Fort, and then headed West on H24, I’d have a much more scenic ride. “Just be prepared for the climb,’ he said. In an instant I remembered Joker, his trailer, and good travel advice. So I decided to take Wayne’s and headed to H5.

The ride was quite peaceful and scenic. It wasn’t long after turning left at Little Fort that the Little Fort or Interlakes Highway took me quickly up to McDonald Summit at 4,103 ft., the highest of 4-5 passes I traversed today. From there I travelled by another series of lakes with spectacular views. Lac des Roches was particularly inspiring.

H24 intersected at its end with H97, and I headed north. This area is much different than the Okanagan Valley I travelled through yesterday. The surrounding countryside had shorter, more compact trees reminiscent of the area just north of Bissett, MB where my sons and I travelled by canoe when they were Boy Scouts. It was a nice stretch of road, but Wayne was absolutely right about taking the Interlakes Highway. 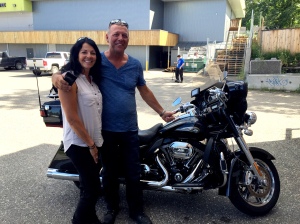 I went to check out the Harley store when I arrived in Prince George. I pulled up and, as I was parking, Claude and Lynn rushed of the door to greet me. I assumed it must be part of their great customer service strategy, but it seemed a bit aggressive. As it turned out, Claude (pr. “Cloud”), also from Québec, recognized my bike. I have #933 of 1,100 CVO™ Ultra Classic® Electra Glide® limited edition model made in 2013. Claude has #169. What are the odds that the two of us would meet in Prince George?

I decided to have a bit nicer meal for dinner, and went to North 54. It is a modern-looking Italian restaurant, and lived up to all of the positive Trip Advisor reviews. 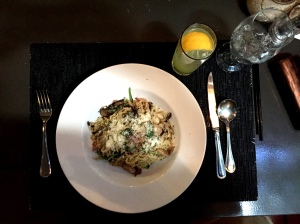 Speaking of Prince George, I’ve now reached the northern most point in my journey. The sun set at 9:14 pm compared to 8:23 pm at home in California; and will rise at 5:19 am here versus 6:10 am in Novato. If I were to head back to Novato first thing tomorrow morning, and take the most direct route possible, it would take 21:51 to cover the 1,371 miles.