I was excited when I woke up this morning about beginning a perimeter-of-the-country ride. My Harley was already packed and ready to roll. Three weeks ago I’d prepared, reviewed and cut a long list of what I needed to take with me, and loaded it all up for a ride to Los Angeles, taking advantage of a planned trip to visit my sister, Janet, and daughter, Jessica. It was a fun ride, complete with rainy weather to test my new rain gear. There’s not a lot of room for luggage on a motorcycle, so packing right is critical to a successful, long-range ride.

I flipped on the starter switch this morning and turned on the iPod connected to the sound system. There was an error message on the screen—“No connection to the iPod”. I tried making a few quick adjustments to no avail. In spite of preparing several days of music for the ride, it was going to start in silence. No worries. The route planned for the first day didn’t really require musical entertainment. God’s creation on the route to Yosemite National Park is stunning. 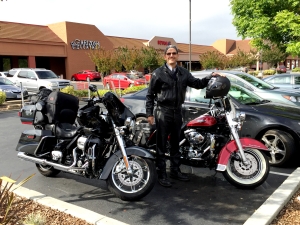 It was a cool morning on a quiet and clear road early on this Memorial Day as I rounded San Pablo Bay headed to Concord, CA, to meet up with my good friend, Dave. He and I rode our Harleys from Charlotte, NC to San Francisco in 2007. He was gracious enough to accompany me on the first day of this new adventure.

We left Concord on highway 4 headed towards Stockton, CA. The highway winds it’s way onto the levee holding the massive California delta. I suddenly had an urge to hear When the Levee Breaks, by Led Zeppelin, but would have to do so after-the-fact. As we turned corners and crossed the old truss bridges I was quickly reminded of a houseboat trip on the delta when Lisa and I were in college at University of the Pacific, way back in 1974. And then again with the senior high group from Moraga Valley Presbyterian Church in 2004. It’s amazing how the riding experience brings back so many memories that are otherwise stored away in some deep recess of our brains. Soon we were entering Stockton near what was once the Tillie Lewis Foods canning plant where I’d spent a fair amount of time early in my career in the food industry. The memories just kept coming.

We made our way out of Stockton towards Oakdale on our way to Yosemite National Park. We passed Jack Tone Road, which reminded me of being “dumped” in Ripon by my fraternity brothers when I was a freshman in college. I didn’t think of it as hazing per se. It was actually a fun, bonding experience! Just imagine three teenagers stranded in row after row of orchard trying to figure out how to get back to campus…without cell phones to call a friend. They hadn’t been invented yet!

A California Highway Patrol officer was directing traffic through a traffic light at Yosemite Junction. My first guess was an accident. But as we passed the area a traffic jam appeared as the exodus from Memorial Day camping was in full swing. The sight was a clear contrast to the surrounding countryside. It looked more like the traffic leaving Candlestick Park after the Dodgers came to town back in 1962. There were only two routes out of Hunters Point where Candlestick was located, and it took forever. The people leaving Yosemite had the same looks on their faces as Giant’s fans did way back then.

We passed by Don Pedro Reservoir in Tuolumne County and witnessed clear evidence of the California drought. The water level was alarmingly low.

There is a significant ascent between the towns of Moccasin and Groveland on highway 120. The (new) road climbs from about 910 feet elevation to about 2,450 feet, or 1,540 feet over a distance of six miles. Old Priest Grade makes the same climb in elevation over less than three miles. We took the shorter route. It’s a fun ride up, and a thrilling ride down based on past experience. As we made our way up this treacherous route I detected the smell of brakes burning. My immediate reaction was to look down at the brakes on my Harley. Then I realized the smell was coming from the cars that were passing me on their way down the grade. About two thirds of the way up there were several cars parked an area designated for overheated vehicles. The smell and sight of steam rising from several cars was a clear reminder of why the new highway was built. The best way to take this route is on a motorcycle.

We stopped in Groveland to have lunch at Iron Door Saloon, a place we’ve both dined at several times previously. It was busy. Our waitress apologized profusely, explaining that the entire town was completely out of French fries. It seemed clear that some patrons had not been very kind to her when they learned of this unusual shortage. This was my first opportunity to extend a random act of kindness to a person who needed one. We didn’t complain about the French fries shortage, or the slow service. Rather, we engaged her in some friendly conversation about how she was holding up as the busy three-day was coming to a close. As we paid the bill and thanked her, I could see a small twinkle in her eye.

We left Groveland and headed toward the park. Both of our Harleys were thirsty for gasoline, so we were on the lookout for the next station. I looked up a location on my GPS and started to ride 8 miles out of our way. That seemed rather stupid, so I stopped and asked Dave if he knew of a filling station on our way. He did, so we turned around and headed toward the park. We rode right by a Texaco station as though it was closed. We made it to the Chevron station at Crane Flat just inside the park with Dave riding on fumes.

The view of Yosemite Valley and Half Dome from Olmsted Point

One of the great vistas on the north rim of Yosemite Valley is Olmsted Point. We stopped there to take a few photos. Then we made our way to Tuolumne Meadows and Tioga Pass, the literal high point of the day at 9,943 feet. No matter how many times I visit Yosemite, I approach the vistas as though I am seeing them for the very first time.

We made our way to highway 395 and the eastern Sierras, one of Dave’s favorite rides, past the town of Bishop to our destination for the day, Lone, Pine, CA. Dave reminded me that Bishop was to be our first stop on a ride we intended to take in July of last year, the day after I went into the hospital. I remember calling him when I was on my way to Marin General and telling him that it was not serious and I’d be ready to ride in two days. So much for wishful thinking…

We met some mountaineers, nice young people from Google, at the Best Western Frontier motel. They had come to climb Mt. Whitney, the tallest mountain in the “lower 48” states at 14,494′. The weather had apparently been bad here last week with some significant snowfall. They could only make it about three fourths of the way up the 4,000 feet climb. They were thrilled to have made it that far given the conditions.

The first thing I did once inside our room was to attempt resetting my iPod. Tomorrow’s ride is going to be a little tedious, so I was anxious to get the tunes ready. The reset worked so I re-installed the iPod into the Harley and we headed to dinner at The Grill. The waiter, Bobby, was a very nice native of the area. He introduced us to the owners of the restaurant and we thanked them for a good meal. All in all, it was a great day! 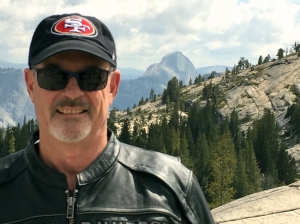