I headed out this morning without a clear idea of my destination for the day. I knew my friend, Carlton, was riding with a group of his friends in New Hampshire at the Laconia Motorcycle Rally. We’d been exchanging messages for a couple of weeks trying to figure out how we might meet. I was waiting to hear back from him when I left Woodbridge. Regardless of my specific stop at the end of the day, I was headed out at the bottom of an S-shaped route with Yale University at the lower end of the S, Amherst College at the middle, and somewhere between Sunapee and Laconia at the top end. Regardless of the final stop, I was going to travel on the scenic routes on highway 169 and 9.

Yale University is a classic, Ivy League campus blended into the town of New Haven. It looked like a great place to spend four years of one’s life. 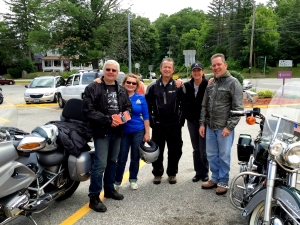 Highway 169 did not disappoint. It winds through some of the nicest countryside I’ve travelled so far. The homes are nice with wide-open space around them. Everything is green, with a natural, abundant look to the landscaping. Ride lawnmowers are everywhere. It’s similar to parts of the gulf coast with one critical caveat…there is no humidity!

I met some fellow riders at the Dunkin Donuts in Canterbury. Andy, Diane, Fernando, Pam, and Mike hail from Ludlow, MA, and were on a day-ride to Newport, RI. Very nice people! 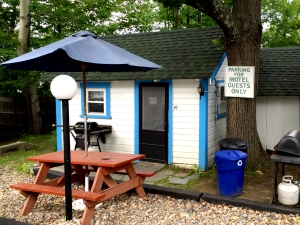 I made a stop just west of Spencer to call Lisa and check text messages. Carlton advised me he was staying near Weirs Beach in Laconia, a favorite summer vacation spot for the New England Lewis clan, as it turns out. I made one call to Weirs Beach Motel & Cottages to see if they, by chance, had any rooms available. As it turned out, someone had just cancelled their room for tonight, so I booked it with ample time to route myself there without backtracking.

The drive in New Hampshire is similar to the Merritt Parkway and highway 169 in Connecticut, except the dense forestation is a blend of deciduous trees and conifers. Highway 9, an interstate scenic byway, winds back and forth from north to south, and provides great scenery.

I rode into the Laconia area without any idea of what to expect. Motorcycle week is a huge event that the community embraces. In fact, I felt like I was in parade with people in lawn chairs lining the roadway and waving to the thousands of bikes cruising by. My motel was only one block from the main event. When I arrived I was greeted by Dan, the owner, Gary, Marty, and Greg. Dan was cooking burgers and offered me one and a beer after I told him about my round-the-country adventure.

I met up with Carlton and his friends as they were having dinner. We had a lot of fun talking about the good old days, and his friends treated me with disrespect…like I was part of the group. Yet I knew this was an annual get away for these guys, and headed to my motel after a short while to leave them to their vices.

The motel was old but quaint, with the back of the floor about a foot and a half lower than the front. Anything I dropped rolled into the back of the bathroom. It was clean, but lacked Wi-Fi, so my nightly writing had to wait. As I rested and reconsidered the routing for tomorrow, I prepared for the big storm headed our way.