Today I rode the highway 101-loop through Olympic National Park (see Wikipedia) counter clockwise from the south east point of the loop. In a way it seemed crazy to ride 440 miles and end up right where I started, especially since I’m getting very close to home. Yet I had a strong desire to explore Olympic, being reasonably certain that this might be my only chance to do so.

Clam Chowder and Chicken Caesar Wrap at the Summit 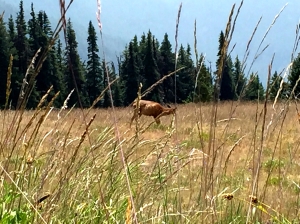 Victoria and Vancouver, Canada would be visible from here on a clear day 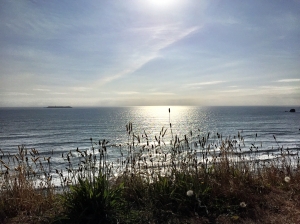 Destruction Island and lighthouse on left

Navigating this park is different than most. Typically one enters at a point, drives though the park, and exits at an opposite point. In Olympic National Park, you drive into it towards the center at several different points along the loop, and return back to the entrance rather than drive straight through. The National Parks iPad app suggested breaking a visit to the Olympic into two days. On day one tour Hurricane Ridge, Lake Crescent, and Sol Duc Hot Springs. On day two go to Ho Rain Forest. Since I had only one day I planned to skip the hot springs.

My first entrance was Hurricane Ridge. It reminded me a little of Glacier National Park, yet wasn’t quite as magnificent. At the visitor center, one particular display entitled Glaciers in Peril included photos of the Blue Glacier on Mount Olympus taken in 1889 and 2009, and of Lillian Glacier taken in 1905 and 2010. Arrows point to the degree to which the glacier has receded over the elapsed period of time. After taking a very close look at the nearest glacier, I realized the park hasn’t updated the sign to indicate how much the Blue Glacier has grown since 2009.

There’s a winter ski and snow boarding area at The Ridge. The Ski Patrol hut had a familiar sign over its door: Ice Station Zebra, which is partially visible in this borrowed photo.

I rode by Lake Crescent and stopped to take it in. It is absolutely beautiful…similar to Lake Tahoe.

As I approached the entrance to Sol Duc Hot Springs Resort, I took a look at my fuel gauge. The resort was 12.5 miles in. To go in and back would take 25 miles. I had enough gas to cover 59 miles, and a gas station was 26 miles away. That gave me a net 8-mile margin. So I decided to go for it. The ride in was great. When I arrived I only wished I had more time to take a dip in the hot springs. Oh, well.

When I got back to the main road my instruments indicated I had plenty of gas to make it to the Shell station in Forks. I rode past a couple of other sketchy looking fueling stops. (Higher-grade gasolines get much better performance out of my Harley.) As I cruised along the fuel-warning gauge flashed low, a little too quickly. Suddenly the Harley sputtered, and then simply stopped. I pulled in the clutch and let her coast as long as possible. The Harley came to a stop 5.6 miles from Forks. Fortunately, I carry a bottle with 22 ounces of fuel for such emergencies. Doing some quick calculations (I’ve been averaging 40 mpg, the bottle contains 17% of a gallon, 17% of 40 = 6.9 miles), I figured I’d make it. I carefully poured in all of the bottled fuel and headed towards Forks. The Harley again sputtered and stopped twice. Both times I was able to re-start it and continued on. I coasted into the Shell station and put a little more than 6 gallons into my 6-gallon tank.

I went on to Ho Rain Forest. I recall reading somewhere that the Quileute Indian Reservation manages the first part of the road out. If they do, they are significantly behind in maintenance. After the first six or so miles a sign indicates that one has reached the national park area, and the road instantly improves. The Ho River that runs alongside the road is full of “glacier milk,” water that looks milky due to glacier sediment.

When I reached the rain forest, were it not for the spruce trees and relatively drier air, I would have thought I was back in the bayou with moss hanging from nearly every tree. I enjoyed a nice if not short hike through an area that is suffering from a lack of rainfall like the rest of the Pacific Northwest.

Travelling south on the western edge of the park I gazed upon the Pacific Ocean for the first time in six weeks. I noticed a lighthouse far out on Destruction Island, and did my best to get it into a picture. 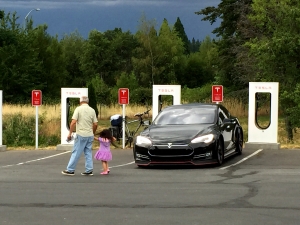 I had planned to ride to Medford, OR today in hopes of visiting with my nephew, Doug and his family. I messaged him a couple of days ago, but hadn’t heard back. So, at Lisa’s suggestion, last night I e-mailed his mother, Mary, got his current cell number, and sent him a text this morning. Unfortunately for me, he, Katie, and their son, Forrest, are camping this week. Sorry to have missed them!

I considered my options and decided to ride to Mt Shasta City, CA to position myself for a better ride in northeastern California Wednesday morning. As I headed out Get Ready by Rare Earth, one of the great cover bands of the late 1960s, was playing…preparing me for what was ahead.

Having ridden the coast of Oregon and northern California in the fall of 2013 with my riding buddy, Dave, I decide to take my friend Bruce’s approach and ride the interstate versus back roads. I’d forgotten how beautiful I5 is from Seattle, WA to Redding, CA, transitioning from forest to farmland to mountainous terrain at Eugene, OR. It was a beautiful ride, especially for an interstate.

As I crossed the border into California Just My Imagination by the Temptations was playing—and it started to rain! It wasn’t more than a sprinkle, but with huge raindrops. In California, we’ll take any form of precipitation. I later learned that southern Oregon along I5 experience flooding soon after I passed through, along with over 1,500 lightning strikes.

The forecast for tonight into Thursday calls for thundershowers, lighting, and high winds. I suspect I’ll be very glad I rode an hour and a half farther today when I hit the road tomorrow. My destination is our cabin near Shingletown and Lassen Park. Once I reach the cabin, the ride is nearly over.