The Weather Channel app indicated a temperature of 44°F at departure, so I dressed for a cold morning ride. That turned out to be a really good thing as the thermometer on my Harley read 32°F as I headed south on C93. I used the seat warmer on low for the first time ever, and the hand grip warmers set to their highest temperature, to keep as warm as possible. It was a crisp and beautiful ride out of Banff National Park in descent to the southwest into Kootenay National Park.

I stopped for breakfast in Radium Hot Springs, BC at a great family spot and had a plate of three eggs, sausages, bacon, hash browns, and a pancake. Having a late breakfast after a couple of hours of riding and skipping lunch seems to make for a better ride throughout the day.

Gasoline prices in Canada can be a bit alarming at C$5.00+ on average. With current conversion rates the cost is US$3.90 on average, not too bad but much higher than in The States.

I crossed the border into the United States at about 1:30 pm MDT. Riding in the Canadian Rockies was a great experience. Yet there is always a unique feeling of “home” when returning to the US.

I stopped in Hungry Horse, MT for the night, and stopped at Huckleberry Patch to pick up some of their finest jam for our visit with friends in Idaho. It is a must-stop restaurant and specialty shop in the south Glacier National Park area.

The Weather Channel app indicated a temperature of 55°F this morning, so I dressed for a moderate morning ride wearing a windbreaker under my mesh, warm-weather jacket. That would have been OK if I was riding in the sun. But highway 2 south of Glacier National Park is predominantly in the trees, so it was a very chilly ride. The ambient temperature was 45°F

I rode east through the funky little town of Browning, MT where I stayed last year, and right by the rough but clean Going-To-The-Sun Inn and Suites motel. I do my nest to ride new roads on every trip, but there’s always an overlap or two on each ride. This overlap brought back some great memories of my ride around the USA last summer.

Quinoa and Spinach Salad with Crispy Prosciutto at Bert & Ernie’s

I really enjoy the wide-open terrain of central, Big Sky Montana. It’s quite a contrast from the mostly forested routes I’ve taken so far. And it provides a seemingly unending view across the vastness of God’s creation. I headed out of my way to ride south through the Lewis and Clark National Forest to take in this scenic ride on my way to Livingston. 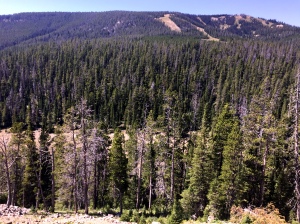 Our oldest son, Kirk, is respectfully captivated by the Mann Gulch Fire, a wildfire that started on August 5, 1949. A team of 15 smokejumpers parachuted into the area in the Gates of the Mountains Wilderness to fight the fire. As the team approached the fire to begin fighting it, unexpected high winds caused the fire to suddenly expand, cutting off the smokejumpers’ route and forcing them back uphill. During the next few minutes, a “blow-up” of the fire covered 3,000 acres in ten minutes, claiming the lives of 13 firefighters, including 12 of the smokejumpers. Only three of the smokejumpers survived. I wanted to ride by and take some pictures of the area for him, but the gulch is hidden by hills beyond the reach of a motorcycle.

The temperature rose into the mid-90s as I made my way into Livingston, positioning myself for what should be a very unique ride tomorrow.

I met Dave from Manistique, Upper Peninsula, MI, at the Super 8. He was on a casual ride enjoying the great weather and headed to Yellowstone. We had a nice chat about my ride through the UP last summer, and some of the places we’ve both been on out Harleys. Very nice, friendly guy. I would have offered to ride with him, but I had a different agenda… 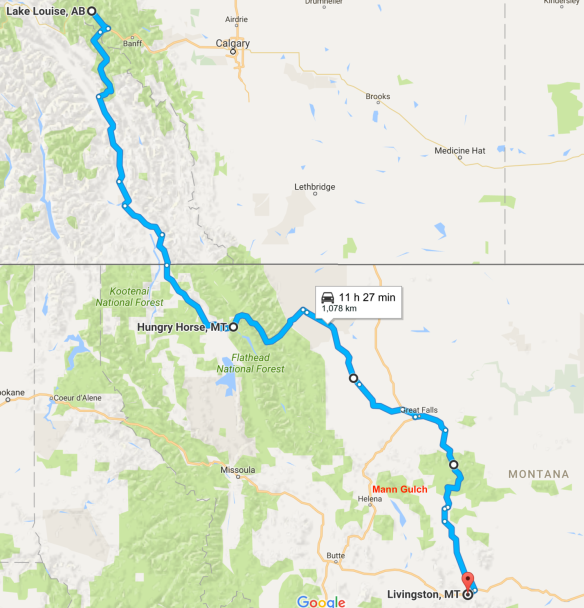